A school leadership guide to success in the modern classroom

by Ryan B. Jackson, Ed.D

If April showers bring May flowers then what, in turn, do these undeniable symbols of spring really bring? For the answer, look no further than your community school, job fair or university graduation ceremony: New Teachers.

Spring sets the stage or plants the seeds (to keep the analogy going) for fall’s new teaching recruits to embark on an age-old journey, where self-interest and financial fortune are abandoned and replaced with a commitment to one of the most noble yet unsung professions the world has ever known. Understandably, after reading that last line, skeptics just rolled their eyes and scoffed at the word “noble” and I cannot blame them. In fact, as an educator in-love with the profession and passionate about its indelible impact on society, I, too, often wonder why anyone in their right mind would willingly dive into a hurricane-infested profession that supplies no life preserver, vague swimming lessons, and reluctant lifeguards. Yet as a second-year administrator, I am astonished and admittedly proud to report that there are still those courageous enough to try their hand at teaching, all the while our nation’s educational landscape seems inevitably destined for civil war.

The question still remains, however: Why would any sane, self-respecting adult commit to a profession that has systematically been underpaid, devalued, even outright ostracized by society at large?

To even begin to answer this head-scratching riddle, I had to reflect on my own pursuits of the profession. In 2007 I simply wanted to teach kids how to write better. Working as a copywriter in the marketing department of a local business, I began tutoring a pair of brothers whose mother had sincere concerns about their ability to articulate thoughts into compelling sentences and paragraphs. And, like most teachers can attest, it only took one tutoring session before I was hooked. The mental connections, the synapse firings, the rush of reading a well-written essay — I knew instantly teaching was for me.

Unfortunately, teaching in the heart of the No Child Left Behind (NCLB) era slapped a rude awakening on my dreams of Socratic seminars centered around the art and science of great writing. Immediately, I was inundated with an accountability-based standardized testing doctrine that was undeniably pressuring teachers to trim the proverbial creative fat from teaching and learning for a leaner, test-prep cut of education. Undaunted, I searched for meaningful, impactful approaches to a test-centered education paradigm. My teaching mentor Ryan Murphey (@ryanomurphey) became Butch Cassidy to my Sundance Kid, as we fashioned ourselves as teaching outlaws committed to thought-provoking teaching styles with universal themes as our ammunition. In those days, I primarily taught junior-level English, and our big focus was the Tennessee Comprehensive Assessment Program (TCAP) writing assessment, as well as the ACT (although the ACT had yet to really solidify itself as the go-to measure for college readiness — at least in the urban school I served). Laughingly, we thought the stakes were high then! In comparison, today’s juniors are put through an unrelenting, stress-inducing testing gauntlet, with state-mandated End-of-Course assessments in Chemistry, Algebra II, English III, US History and the ACT earmarked as indicators of academic mastery…and yet we still debate the variables behind attendance and dropout rates in schools. 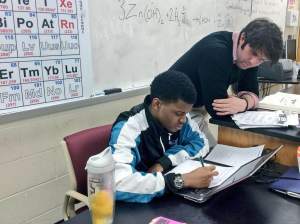 In 2015, teachers are expected, if not molded, to be test-prep machines. The art of teaching has almost solely been eclipsed by the exact science of teaching, which extracts student data, funnels it through a test-prep logarithm and prescribes a teaching-treatment designed to systematically do one thing: raise test scores. Unfortunately, this expectation is not always prefaced in teaching programs, both undergrad and graduate-level. Sure, accountability is a vaguely expressed understatement but there is little transparency as to a current teacher’s role as a mere mechanism, a cog in education’s test-prep wheel. One could make the assumption that teacher training programs purposefully bamboozle upstart teaching candidates into thinking teaching still upholds the values expressed in a Norman Rockwell painting, only for said teachers to walk into an interview where a principal expects rapid-fire, test-prep strategies to fly off of a prospective teacher’s lips. Of course, this is merely one observer’s theory, but the recently documented decline in teacher training program enrollment begs for further analysis. Read about teaching aversion here: http://www.npr.org/blogs/ed/2015/03/03/389282733/where-have-all-the-teachers-gone.

I have purposefully chosen to exclude the particular politics, or perceived politics, of the increased standardized testing demands. However, the idea of test-failure and its supplemental resources as a profit-center for certain corporations are not lost on me. I have instead chosen to focus on teachers as collateral damage from this ongoing ideological, ethical battle.

Thus, let me crystalize my forward-thinking outlook on education. For the last two years I have crafted a consortium of sorts. I have chosen to surround myself with revolutionary educators and underdog advocates who have publicly and professionally embraced the role of change-agent as it applies to education’s uprising. Revolutionaries like @champion4chldrn @drizzinkwine @letskae @ketric @urban_teacher @ryanomurphey @caseytward @panthersart @jrhtravis @nalang1 and @heffrey all stand at the forefront, cresting the threshold of a new education paradigm — one that embraces creativity and ingenuity, shuns standardization masked as responsibility while bravely, if not boldly, serving as a beacon of light for the new crop of 21st century educators about to enter the most exciting time to be an educator.

At first read, the word “exciting” used to contextually describe education may seem overzealous, misplaced or outright aloof, yet consider some of the recent facts:

The aforementioned facts can only be seen as catalysts advancing us further towards an education revolution. It stands to reason then that the new cavalcade of teachers storming education’s front-lines will serve as imperative reinforcements, supporting a weary yet passionately committed army of synapse warriors (my favorite way to describe teachers) who have relished the opportunity to seize-back autonomy over their profession while dramatically impacting the two components they hold most dear: teaching and learning.